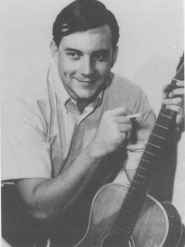 In 1962, William Moses Roberts Jr. copyrighted the song entitled “Hey Joe”. Several things about this “Hey Joe” have led people to question whether Roberts really wrote it. Because it draws on so many well-established song conventions, the song seems considerably older than the date of the copyright. And some observers claim that Roberts has not been consistent in explaining how he wrote the song.

Billy Roberts sung and played “Hey Joe” with John Cippolina, Nick Gravenites, Greg Elmore and Dave Killmer at Club 9, San Francisco, August 20, 1986. John and Greg were members of the Quicksilver Messenger Service! He was introduced as a great songwriter. ‘I think his biggest hit was a song recorded by a lot of people …: “Hey Joe”‘!

I first met Billy in Reno, Nevada, where he had gone in the winter of ’61-’62 to get a divorce from his then-wife, Susan. We hung out together for a couple weeks and Billy played me every song in his repertoire on his trusty 12-string. Among them was “Hey, Joe,” with lyrics as you reprinted them on your site. He also showed me his copyright on the song, dated that year. After his divorce was final, Billy returned with me to San Francisco, where he took up residence for awhile, playing in the coffee houses on Grant Avenue and elsewhere.

Billy went off traveling around the country, but he returned to San Francisco and in 1965 I happened to hear The Leaves recording of “Joe” at a friend’s house in North Beach. I immediately called Billy on the phone and asked him if he had heard it. He had not, and there began a long-running saga that (apparently) continues to this day. Billy was furious that no one had contacted him, since–whatever disputes there may be about authorship– Billy owned the first copyright to the song. As it happened, my father was a well-known attorney in San Francisco at the time, and I introduced Billy to him. My dad approached the publisher of “Hey, Joe,” at Third Story Music in L.A.– a man named Martin “Mutt” Cohen. Dino Valenti had claimed to have written the song and Third Story had published it, with Dino named as the writer. However, based on the earlier copyright, Third Story agreed to recognize Billy’s authorship–providing that he give them a share of the songwriter’s royalties in perpetuity! Such is life in the music biz….

In 1967 and’68 (the period of the “Summer of Love”), my brother and I and a group of friends started a dance hall on Haight Street called the Straight Theater, which was action central for the neighborhood bands and featured many of the top groups of the day: the Grateful Dead, Quicksilver, the Charlatans, Blue Cheer and many, many others. On a couple of occasions Billy Roberts played as an opening acit, performing (of course) “Hey, Joe.” After the Haight crashed and burned in ’69, we migrated to Pacific Heights, on the other side of town, and leased a storefront with a large space in back that we rented out to various bands as a rehearsal studio. The bands included Nick Gravenites and, later, Santana. This was the period (1970) when they were rehearsing and recording “Abraxus,” and the band had tons of money. Santana ended up building a magnificent recording studio, but because they did an inadequate job of soundproofing it, the landlords told us they had to leave. Billy Roberts was living in the building, and after Santana departed he bought a TEAC 4-track recorder and started making demos of his songs. Why not? We had a brand new professional studio. At some point, I became his business manager, handling his publishing affairs and collecting the royalties on “Hey, Joe.” With the numerous recordings of “Joe” having come out (as you document on your site), not to mention the seemingly un-ending reissues of the Jimi Hendrix version, those royalties were substantial. Billy and I eventually parted company, but not before I had produced his one and only album, “Thoughts of California” –a country-rock recording featuring a number of takented Bay Area musicians. The album was recorded at Different Fur, a longtime San Francisco studio. It did not include “Hey, Joe” (probably because Billy did not want to pay royalties to Mutt Cohen), but we did record a number of versions that I still have, including the so-called “disco” version” featuring drummerJoey Covington of the Jefferson Starship and some other talented Bay Area musicians. I also recorded a live performance of Billy at the Drinking Gourd, a popular folk club on Union Street.

In the early ’90s, Billy Roberts was seriously injured in a car accident when his Toyota Land Crusier went over a cliff on Highway 1, north of San Francisco. I’m afraid the woman who wrote you about being Billy’s girlfriend in the ’60s will probably not be hearing from him, as he suffered a brain injury that has left him confined to a long-term care facility in a Southern state. I have spoken to his mother, who says he looks great but has limited short-term memory, meaning he will probably remain in the hospital. On the other hand, if his long-term memory is intact, and he surfs the Internet, you never know—she may get an email!

One final note: a few months ago an old friend of Billy’s from the folk days passed through S.F. and gave a friend of mine a dub of a tape Billy recorded around 1961. It contains all traditional folk songs, except for one, that Billy sings in a strong, youthful voice:
“Hey Joe, where you goin’ with that gun in your hand?…”

Mail from from Pat Craig

I’m an old friend of Billy Roberts. Knew him in the sixties when we both used to gig at The Zodiac – a club on Fillmore in SF owned by Tom Swift, the KSAN DJ. We used to swap songs – I used to do a very Beatlesque version of “Hey Joe” and he did a very Delta version of my song “Beyond This Place”. The confusion about Dino’s ownership of the song came from an act of generosity on Billy’s part when Dino was in jail. Billy signed over the rights to the song to give Dino some collateral to get out of jail. Billy did write the song, but as you say, it is based on many old Delta Blues themes and is probably very much “rearranged” from several different versions of very similar songs. When we were kids in the early 60’s we listened to Leadbelly, Dave Von Ronk, and any old blues stuff we could get our hands on. Hey Joe, if you look at it is almost a generic blues piece. Billy, however did put together the version we all know. By the way, Billy was in a motorcycle wreck back east a few years ago and and now is in a very poor state

I met Bill Roberts in Paris, France in July or early August of 1960 and can tell you, absolutely, that he sang “Hey Joe” then. When he shared the song with me, he told me he had written it.
My sister and I were traveling through Europe that summer and met Bill at a Paris sidewalk cafe. He was with another fellow — as I recall, his friend’s name was Jesse Farrow (i.e., Dino Valenti). Both carried guitars on their backs, Bill a twelve stringer, Jesse a six string guitar. My sister and I were musical, too, so it was easy to get acquainted. Several days later, the two fellows came to our hotel and asked us to bum around the city with them and, quite literally, sing for our supper. My sister declined, but I joined them. We sang and played for Parisians and tourists along the Champs-Elysees well into the night, collecting tips in a hat. Along the way we were interviewed by a reporter for some French newspaper or magazine. I think we were photographed by the reporter, too. When we’d grown tired and had made enough money to feed ourselves, we went to an underground cafe to eat and drink plenty of wine. Things got a little fuzzy after that, but somewhere along the line we smoked hashish and danced on the table tops through most of the night. I was eighteen at the time, so, you can imagine, it was quite a wicked adventure. The following afternoon my sister and I left Paris for Brussels.
I heard from Bill Roberts several months later when I was back in the States and at college. He came to see me there and stayed the weekend or more with friends of mine who had an apartment in town. Of course, there was lots of music over the weekend. I still have a photo of Billy Roberts and my friend, taken during one of those sessions.
I remember Roberts as a fine musician and a spirited person.

He (Billy Roberts) wrote a song and recorded it in my husband’s studio in 1998. A few weeks prior to that, we spent the day with Billy, his mother (Christie, who I’ve known since the 70’s), her husband (Alfred, who has since passed away) – and for the first time since his automobile accident he sang “Hey Joe” and my husband accompanied him on guitar.
I’m ashamed to admit that I haven’t spoken with Christie in four years, so I have no idea whether or not she’s still alive.

35 Responses to More about Billy Roberts